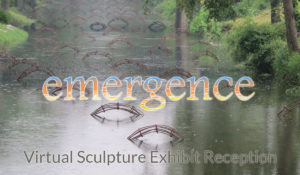 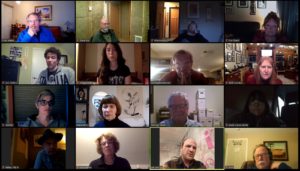 Although PNWS can’t host a social gathering* due to COVID-19 restrictions it is still important for the membership to meet.

The Annual Meeting gives the Board a chance to share:

We are also excited to show you our new website! 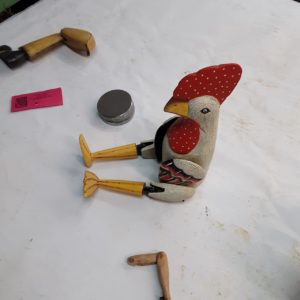 I’ve wanted to do this since Carole first asked me to announce it. I finally made the third iteration and was not disappointed. What a hoot. Here’s the idea. On certain Wednesdays, (to be announced to members) Carole Murphy opens her sculpture studio and her immense collection of oddities for members to use as they see fit.

Now I just stuffed my collection of “I may want to make something out of this someday” items in a 10’ x 20’ storage unit. Compared to Carole’s collection that is puny and I am filled with shame. That is to say, there is a rich collection of materials and media available at Carole’s sculpture studio. There is a wall of chisels, beaver chunks, shiny doodads, and feathery bits from some creature that died in the sea. There is fodder here, workbenches, and tools. If like me you toil in a studio alone, with little heat, and poor light, rats nibbling at your heals, a visit here would be a welcome relief.

Right off I found most of some wooden puppet thing that had suffered decapitation. Carole offered the head of the temple lion dog which I obtained by means of a cement saw. I spent the session carving down the neck so it would fit in the body of the puppet thing. I was successful in this. Not only that but it no longer looks like a lion dog but more like a pig and I’m not done yet. I don’t know where this is going. I don’t know what’s in that chunk of head cement. All I know is that I hope it’s worthy.

Joe Cartino appeared. Being a sculptor of put-together bits I am not surprised that he would be drawn to such a place. Here he examines some artifact to determine if it could be art or he should put it down quickly, back away, and go wash his hands.

What are these? you may ask. These are the things that beavers chuck out of trees. The inedible bits they spit out as they take down your price Japanese maple. Wouldn’t it be fun to make a beaver out of those?

Here’s a box of letter stamps. Old school letter stamps. It goes on and on. Shiny and matt, plastic, metal, wood and shell, antique and newish. It is a thing of mine. If I miss my hoard I can go here and feel at home. Watch for announcements. This is a fun thing and a chance to collaborate or just show what you’ve made to another sculptor who will understand and not think you are weird because of it. Then again…

Here are some of the thousands of things available: 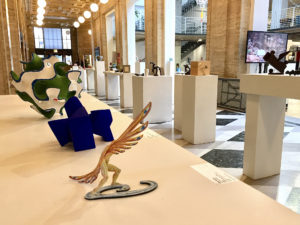 We, the members of the Pacific Northwest Sculptors Association, wish to extend a warm welcome to all those attending the 29th International Sculpture Conference. You will find Portland and the NW in general to be an intensely creative place. The winters are mild, the summers are delightful and the scenery magnificent. It is a good place to live and a wonderful place to be a sculptor.

You will find plenty of evidence to support that idea if you partake in any of the field trips arranged by the ISC.

I would highly recommend visiting the Micheal Curry Studios where you will find very large scale puppetry and astounding set designs for stage and film.

The Form 3D Foundry will introduce you to the state of the art techniques which art serving to advance the art of sculpture in surprising ways.

Echinger Studios is having a reception preceding the keynote address at Reed College on Monday the 14th at 3:30 pm. There you can meet many of our local sculptors. Marty Echinger himself is one of our founding members and has a wonderful studio.

Finally our group, Pacific NW Sculptors Assn. and the NW Stone Sculptors Assn. have joined forces at the ArtReach gallery to present a joint exhibition. It will run concurrently with the conference. This is a juried show with outstanding works from both groups. The location could not be better as it is directly across the Park Blocks from the Portland Art Museum. The gallery space is on the lower floor of the historic First Congregational Church. In fact, the first art exhibition in Portland was held at this location in 1874.

Members of Pacific NW Sculptors, (PNWS) and the NW Stone Sculptors Assn., (NWSSA), will soon receive a call for an exhibition to coincide with the International Sculpture Conference. The venue is the ArtReach Gallery, located across the Portland Art Museum which is the home base for the conference. The space is large and elegant. Signage will be visible from the steps of the museum buildings and conference attendees will be aware of the exhibition.

We feel very fortunate to have the opportunity to show our work a stone’s throw from the conference itself.

Thank you to the following stone sculpture event collaborators:

Dr. Sheldon Hurst, director of the ArtReach Gallery, for offering this wonderful space.

Also, to Bob Dale for making the initial inquiry and following up by arranging meetups.

Carl Nelson, president of NWSSA, for coordinating with members of his organization and going out of his way to help ours as well.

Thanks to Show Chair, Chas Martin for being at the forefront, doing the heavy lifting and no small amount of the thinking. Meeting with the above people has been a productive pleasure.

Members of both organizations are encouraged to apply. Here is a chance to have your work seen by a select audience of sculptors, collectors, gallery directors and museum curators.

Update: The call has now been released and summarized in this newsletter. See the link at the end of the article to the entry form itself. The deadline is August 17th and the call is open to members of Pacific NW Sculptors and the NW Stone Sculptors Association. Best of luck to everyone who applies and thanks again to Dr. Sheldon Hurst for the opportunity.

To learn more about Pacific Northwest Sculptors events, or contact us today!

Perhaps the most valuable feature of a group as diverse as ours is that we’re such a diverse group. Every meeting I’ve attended has resulted in some insight, recommendation, introduction, new product idea, new connection that I had not expected from someone I had not known before. Networks like ours are rich with opportunities like that. I would love to see more members attend more meetings to expand the mix of potential intersections even further.

Another benefit of our monthly meetings is seeing the workspaces and processes of our members. I never get bored learning about how other artists think, work and manage life. It’s a juggling act we all experience. Sharing those experiences gives us more options to solve our own challenges with new ideas. There’s always someone within reach who can offer advice, support or perspective.

And that brings me to the next point. Before Isabelle and Paul moved to the Alps, they were our most dedicated volunteers. They did so many things, every month, without fail. We knew when they left it would create a large hole in our organization. And, we knew it would take some time to motivate others to take leadership. It’s starting to happen.

I was extremely pleased this past week with the effort of Alan Newberg, James Finnigan, Michele Collier, Nancy Bocek and Robert E. Gigliotti who put together this month’s epic, 12-page “Calls For Entry” list. What an incredible job these members did! The listings were thoughtfully screened from a larger set of sources than ever before. I think this monthly service is incredibly valuable. I’m glad it’s back on track. Many thanks to our team.

We’re a volunteer organization. As a member, whatever your level of commitment to PNWS, consider taking it up a notch. Maybe you can’t commit to a monthly task, but consider what you can offer. Show up at a meeting. Host a meeting. Write an article. Recruit another sculptor to join the group. Don’t underestimate the value of what you know or what you can share. Being there is, in itself, a benefit.

A YouTube video of Edmonds, Wash., sculptor, and PNWS member Pam Mummy at work clay sculpting was released by its creator in November and has since “gone viral” with over eleven million views as of Dec. 26.

What makes the video so interesting is that the three head-and-shoulder sculptures Mummy created for the project were based solely on verbal descriptions of each subject by a loved one who happened to be blind.

The video, created last summer, is the project of Cut.com, a Seattle-based video production company that found Mummy through PNWS. “The crew came to my studio and set up lighting and lots of cameras for the film,” said Mummy. “Three blind people were chosen for the project, and each had lost their vision in about the past 15 years.”

Mummy said she would start with a skull shape and begin the sculpture as each person started to describe their loved one.

One of the blind persons taking part was a woman who described her son and had not touched his face for years until the day before she sat down with Mummy. “She felt it didn’t matter how people looked and her son did not particularly like to be touched,” said Mummy.

It’s All in the Clay Sculpting Details

The second person was a woman who described her assistant, whose face she had never touched until the week before the clay sculpting session. The woman had never asked to touch the other’s face “because she had felt she knew just how she looked,” according to Mummy. “She was correct. She was very aware of every detail of her face.”

The third participant was a man who touched his wife’s face often and, said Mummy, he “was very good at describing how she looked. His approach was very mathematical and (he) had used his hand to measure the distances of her face. He had been an engineer.” Mummy said it took two full days to record the video and that “it was fascinating to be involved in the production.” The husband and wife pair asked to keep their sculpture; the other two were destroyed.

Mummy said it was “like sculpting in the sand; they weren’t meant to survive.” Besides being viewed widely on YouTube, a story about the video also appeared in the Daily Mail of London. One YouTube viewer of the video suggested in a comment that next time the video-maker “should blindfold a sculptor and make them feel a model’s face and sculpt it.” View the video online at https://youtu. be/xkVaSXAu5vY. Learn more about Pam Mummy online at http://pmummy. com.