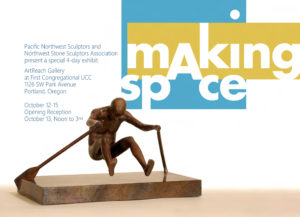 This month, our Making Space sculpture gallery show displayed the talent and commitment of both Pacific Northwest Sculptors and Northwest Stone Sculptors Association members. ArtReach Gallery is a huge space and we filled it with excellent examples of our work. We drew a steady stream of visitors. I heard many positive remarks about the quality of sculptures in the sculpture show from International Sculpture Conference participants. We presented ourselves well.

Collaborating For A Sculpture Gallery Show

The effort required to assemble 39 pieces from 25 sculptors was epic. We had five or six sculptures between 5’ and 8’ tall. There were multiple stone sculptures nearly equaling the weight of their creators. My only regret is that the show only lasted four days.

The lack of sales was disappointing, but the boost in visibility and a few new memberships may have long term benefits for the organization. This was our first collaborative venture with NWSSA. I hope we will produce another show in the Seattle area. Sheldon Hurst, the curator at ArtReach has also suggested we display a few sculptures at ArtReach on an ongoing basis.

Special thanks to Bob Dale for identifying the space and making introductions. Working with Sheldon Hurst was as pleasant an experience as I’ve had in a long time. Additional thanks to Dave Gonzo and Andy Kennedy for moving pedestals to and from storage. A special thanks also go to Sue Quast for taking the lead on hospitality for our reception. And, no activity is complete without a thank you to George who helped with coordination and assisted in judging the entries. Shelly and Jessica worked kept us visible on social media. Thank you to all the participants who put a lot into getting work to and from the gallery for such a short event. And, finally, there are a number of NWSSA members who deserve a nod, including Cyra Jane and Carl Nelson whom I worked with directly.

Thanks to Marty Eichinger for co-hosting a reception for conference attendees and PNWS members. That was a great networking opportunity.

I’m sure I’ve overlooked a few others who also deserve to be thanked. My apologies.

Pacific Northwest Sculptors President George Heath welcomed members and guests to the group’s monthly open meeting on the evening of Jan. 19 at Form 3D Foundry in Portland to demonstrate the advancements of 3d modeling technology.

This time, the meeting featured an up-close look at innovative 3-D printing technology and how sculptors are using it to advance their art. The host for the evening was Rob Arps, the founder of Form 3D Foundry. He was assisted by Production Manager Steve Christman.

The evening began, as usual, with a get-acquainted social hour featuring potluck dining fare accompanied by an array of beverages. While many stayed close to the food and beverages during the socializing part of the event, others freely explored the sprawling studio in close-in Southeast Portland where, even after regular business hours, a large, automated 3-D printer was quietly at work by itself in something resembling a laboratory clean room.

Form 3D Foundry provides a wide variety of services for sculptors including, for example, 3-D scanning in the studio and on location, digital sculpting, traditional sculpting, and the creation of enlargements and reductions of existing pieces. The studio also provides robotic machining of various materials including blue PIB (pipe insulation billet) polystyrene, white polystyrene, polyurethanes, and wood, and can also do clay milling over foam.

While the studio seems outwardly to be a technological tour-de-force with exotic machines and wherever one looks yet another computer terminal, Arps stresses that the creation of art is the core or heart of what he, his staff, and their clients do at Form 3D. In remarks at the meeting, he explained that he is “reluctant to use the term ‘digital sculpture’.” He thinks it is “demeaning,” that it diminishes the indispensable role of the artist. Rather, as he points out on the studio website, a constant he insists on is “to explore, embrace and utilize technology in order to propel art and sculpture forward.” He calls it “the use of technology grounded in traditional artistic principles.” During the social hour at the January meeting, he elaborated on this theme at considerable length to the rapt attention of all present. Before the formal guided tour, everyone introduced themselves.

The crowd included long-time PNWS members, new members, and non-members. Among the members present were Julian Vos-Andreae and Marty Eichinger, both of Portland, and Nancy Thorn Chambers of Olympia, each of whom is working closely at present with Form 3D Foundry. Member Alisa Loony of Portland was on hand. She, Vos-Andreae, Jennifer Corio, and Dave Gonzo are coordinating this year’s PNWS celebration of International Sculpture Day (is Day) set for April 24. Gonzo also attended the Form 3D event. Looney outlined plans for this year’s event and encouraged members to volunteer to staff the event.