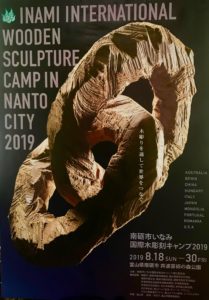 Japanese art has been a big influence on my aesthetic and choice of wood as my primary medium. This August, I will be attending the Inami International Wooden Sculpture Camp in Nanto City, Japan. It will be held at Zuisen-ji, the largest temple in the Hokuriku region, built-in 1390. The vicinity is the workplace of 200 woodcarvers, one of the world’s largest woodcarving centers.

Each invited sculptor is given a 6-foot log and 10 days to complete the artwork. The finished art becomes part of Nanto City’s Public Art Program. The theme of the carving camp is “To Bring the World Together through Wooden Sculpture.” It’s a mix of international sculptors and traditionally trained Japanese artists all working on the temple grounds. The public is welcome on-site to watch the progress. In fact, it is a great opportunity to witness the camp to celebrate both the long tradition of wooden sculpture and help advance this art into the 21st Century.

The opportunity to meet sculptors from all over the world, and to have a focus on the wooden sculpture is a rare experience for everyone to learn new techniques and exchange ideas. It is a positive environment to understand at a deeper level this ancient art we practice. While the event is not a competition, carving a 6-foot log in ten days will be a personal challenge of planning, skill, and stamina. Japan in August is hot and humid.

On the registration form, they requested both an image and the meaning of the work I intended to make. I had an idea inspired by a famous poem by Matsuo Basho for very Japanese flavor artwork. Rereading the directions carefully, I found the stipulation that it reflects “your culture.” That made me pause: “What is my culture?” After a lot of thinking, I decided if they want my culture: Western, Christian, Catholic, I would carve “Listening to the Moon.” A young woman and the moon as an angel, an Annciation. First carved as a small detail of a large sculpture, this is the opportunity to enlarge it. All the finished carvings become part of the public art collection of Nanto City.

To learn more about Patrick’s work, Pacific Northwest Sculptors, or, contact us today! 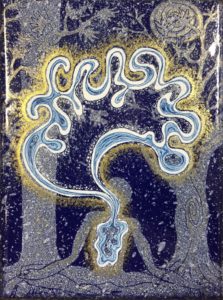 PG. I’m curious about artists who combine different disciplines. We share a love of drawing, dance, and sculpture. I’d like to talk about process. When we are focused on “Making ART” it is easy to ignore our body’s needs. How do you care for your spirit’s needs as a sculptor? Ignoring that aspect is problematic if we want to create art that communicates spirit instead of just manufacturing a skillful commodity.

AL. Many of the stretches and exercises that I do are essential for my body to function and to do physical work. Movement is key to keep my body mind and spirit all working properly. If I don’t move, I am literally in pain, my mind is not happy and my spirit feels stuck and I can’t draw well. Also, the computer is the hardest on my neck so I tend to avoid working on it.

How A Sculptor Translates Movement Into Form

I am still very drawn to depicting movement, yet not as much directly to the image of the dancer(s) as I was before. I have always been held captive by the energy of the body, and how it is the same energy as the river, the flow of life, the power of it, a strength of the body, the balance, the completeness of one human expression. My consciousness is expanded to the broader recognition of the web of life. How I can best depict our deep connection to nature and to each other?

One recent piece was inspired by the vision of humans breathing with the trees. We support the trees with our out-breath, and they support us with their oxygen. This was largely inspired by Treesister’s meditations which include gentle movement, and focuses on the deep connection to nature and trees. I am exploring how we co-exist with nature, how we can support the healing of our world and each other. This is primary to me now.

Currently I’m making an enamel on steel spirit mask. It depicts the rich layer of soil and fungus deep in the roots of the trees. Trees and fungus support each other with life giving properties. The roots take the shape of a human face, and the piece is titled: Rooting Tree Spirit.

I have had many, many years of movement – explored through dance and then brought that energy into drawings and paintings. Over the years that has developed what I call Sketch in Motion. I enjoy teaching this process.

Dance of a Sculptor

As a dancer, the movement I am longing to do is largely outside, along the river, under the trees. I have decided to start a movement class near our home and studio called: “Move with ease in the trees.” It is my hope that this brings movers to me that also feel this calling to move and to connect with the trees and nature. I will keep it gentle and improvisational, for any age, and will provide art supplies to allow whatever self-expression or inspiration to come out. Afterward, we warm ourselves up indoors and gradually take it outdoors as the movers feel comfortable to do so. I am leading this from what I need as an artist.

PG. Thank you, Alisa. I love the idea of leading from what you need. An artist doesn’t just make a product but is someone who integrates the different interests of life as a creative process.

To learn more about Patrick’s work, Pacific Northwest Sculptors, and contact us today!

About 25 PNWS members and guests gathered at the southeast Portland studio of PNWS member and board director Shelly Durica-Laiche on June 15 for an evening of connection and exploration of another artist’s interactive art installations.

In a departure from the usual format of these events, Durica-Laiche chose not to share her work, but, instead, that of fellow artist Myles de Bastion whose work space occupies the same building as Durica-Laiche’s studio.

De Bastion is not a sculptor in the traditional sense and may not call himself a sculptor. Still, his work is three-dimensional and possibly more. De Bastion, who is deaf and also a musician, works with sound and light. Specifically, he creates electronic devices that transform sound that he cannot hear into light and vibration that he can experience.

The most striking example of his interactive art installations on display was an upright piano that he had transformed into a light-generating device. He demonstrated at the keyboard, playing chords that were simultaneously transformed into rich rivers of flowing color on a grid of light-emitting diodes that he had installed where the piano’s front panel used to be.

De Bastion’s audience was rapt, and a number of them later tried their hands at the keyboard. The LED piano was previously displayed in the main lobby of the Oregon Museum of Science and Industry in Portland where visitors to its 2015-16 “Guitars: Science of Sound” exhibit also could play the piano and visualize sound.

De Bastion’s creative work with technology is part of a larger creative mission. As the founder and president of the nonprofit organization, he calls CymaSpace, he is committed, in the words of the CymaSpace web site, to “making cultural events inclusive for the deaf and hard of hearing.” His workspace is also a performance space for the kind of inclusive events he produces.

De Bastion has dual citizenship in the United States and the United Kingdom. He grew up in England where he graduated from college with a degree focusing on computer science and animation. Although deaf, he has a life-long interest in music. At university, he was chairman of the Musician’s Society for two years.

After settling in Portland, de Bastion was motivated to create CymaSpace. In the words of CymaSpace.org, “as a musician and visual interaction designer who also happens to be deaf, he experienced first-hand the challenge of participating in a world that for the most part takes for granted the accessibility of sound. “

CymaSpace aims to create bridges between the deaf and the hearing in a positive way that opens doors for underserved minorities, changes misconceptions about deafness, and strives to make a real, socio-economic difference. Through its work, it shows that everyone benefits by lowering barriers that prevent equal access to art and culture.

CymaSpace focuses on making cultural events inclusive for the deaf and hard of hearing. They develop art and performances that largely feature the synergy of sound, light, and vibration. The organization takes its name from cymatics, a term derived from the Greek word meaning “wave,” as in sound wave or sine wave.