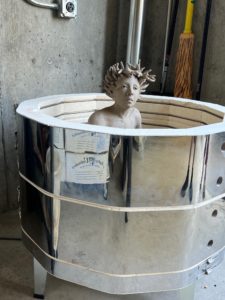 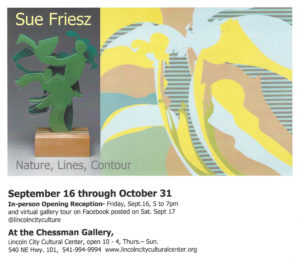 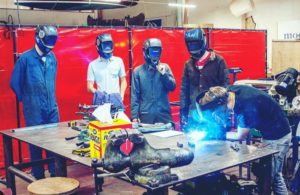 Our meeting this month will take place at Art Design Xchange at 417 SE 11th Avenue, Portland.

The space is home too many creative types in many disciplines. We are invited to meet their members and see the space. Here some detail around Kelly and Blue the team at ADX

Kelley is founder and owner of Art Design Xchange (ADX), a Portland based makerspace and creative hub for artists, designers, builders, makers and innovators that has been going strong for over 10 years. She is the author of two books: Cartopia, Portland’s Food Cart Revolution, and Portland Made, The Makers of Portlands Manufacturing Renaissance.

Blue is a Portland based mixed media artist and the community manager of Art Design Xchange. Blue’s work focuses on the relationship between all things, activism, and social justice initiatives. His pieces range from realism, to gestural, and abstract. He strives to have his subjects embody the spirit of the thing rather than be a copy. Blue’s primary mediums are; acrylic paint, mixed media and resin on wood, wood-burning, and colored pencils. 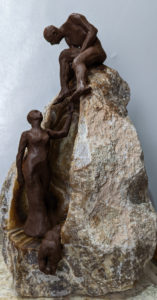 This was our second collaborative show in recent years. The results are a combination of serious thinking and some pure fun and fantasy.

Sometimes an artist’s design takes on a life of its own. For Ulrich Pakker Studios, one such design is TriElements Fountain. This is the story of how TriElements became the studio’s most oft-repeated design.

Seattle’s Pioneer Cemetery approached Ulrich in 1999 to create a memorial fountain. First, he built a small model of a fountain for the proposed site. He used a broken circle as the main design element. He explained to the cemetery’s board “The broken circle’s C-shape depicts visually the two halves of existence. The stainless-steel represents the concrete and tangible life on Earth. The water is the intangible existence before birth and after death.” In the end, Pioneer Cemetery decided not to go with a fountain because the infrastructure and maintenance costs proved prohibitive. And the model Ulrich built?

Ulrich’s installed his first major artwork, Nebula Torcida, on Redmond’s Microsoft campus in 1999. The American Institute of Architects soon invited him to exhibit his work at their Seattle office. Ulrich included the model of the single element fountain.

Ulrich’s clean lines, component interactions and clean stainless-steel finishes intrigue architects. The AIA chose the stainless steel fountain model as the exhibit’s centerpiece. Ulrich fabricated an octagonal basin with a false bottom to hide the small fountain’s plumbing. During the exhibit’s opening, white wine filled the fountain’s basin flowing out of the fountainheads. The exhibit’s attendees served themselves from the art. Commissions, connections and good friends sprung from that exhibit.

Following on the heels of the PASG, Ulrich won his first monumental public art commission. The City of Everett awarded Ulrich a commission for a 20-foot-tall TriElements design named Trivergence. It is installed at the Everett Events Center, Everett, Washington (now the Angel of the Winds Arena). Trivergence serves as the backdrop for many Boeing news conferences.

Since 2003, this elegant design has been recreated dozens of times fabricated in sizes ranging from 6-foot up to 14-foot tall, always fabricated from stainless-steel.

But the TriElements design hasn’t always involved water. In 2014 TriElements got a sister design.

A corporate client in 2014 presented Ulrich with a problem. Once more, Ulrich’s broken circle design proved itself innovative and up to the challenge. The clients’ dilemma involved their corporate headquarters entryway in Fort Worth, Texas. They loved the TriElements Fountain. The board wanted to place a 14-foot fountain next to the entrance. Unfortunately they soon realized a strong gust of wind might deliver their visitors an impromptu shower. Ulrich thought hard and pivoted quickly to proposing a glass fountain. Arcs of glass replace the waterflow. The new design: Glassflow. The clients signed off on this newest iteration. Its successful execution and installation left the clients awestruck. Ulrich Pakker Studios has now created a dozen Glassflows from New York to California.

TriElements’ three components are not plumb-bob vertical. They balance on each other in an off-kilter fashion, lending movement and whimsy to the design. Each fountain differs from the next, depending on how Ulrich sets the components together. The TriElements design continues to lead the studio forward. Who knows what the next iteration might be?