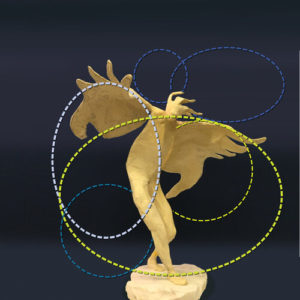 Humans have a natural ability to see and recognize things. You see something and your brain immediately matches the image to a pattern you’ve seen before. You recognize the object. It’s 3D form. Comprehension is complete. Congratulations. You’ve recognized the object and completely missed the space – the invisible element of the image.

Space is only invisible until you see it. Once seen, it cannot be unseen. The void becomes a thing. It’s real. It’s tangible. It adds another level of comprehension to your experience of the object.

In this 2-dimensional example, the positive and negative spaces are flat. Aristotelian binary logic recognizes two options: white and non-white. Everything that is not positive is summarized as negative. There is form and non-form (aka space). That logic is fine if you’re trying to win an argument. In a 3-dimensional world, it’s a bit more complicated.

Think about the musical equivalent of this argument. There are notes and non-notes. All notes are part of the melody. Everything else is collectively defined as a “rest.” There is much more to music than notes and not notes. Imagine Beethoven’s 9th Symphony without the voids between notes. It would be a continuous stream of occasional repetitions with no punctuation, no cadence, no impact. The rest between notes provides valuable space to comprehend what you just heard, to anticipate what you will hear next, and the opportunity to appreciate the uniqueness of the moment. The frequency and duration of the rests are as important as the notes they separate. Many different notes create a melody. There are many different shapes and sizes to the voids.

Sculpture is a Melody of 3D Form Contained by Spaces.

The voids help you comprehend what you have seen, anticipate what you will see next and the opportunity to appreciate the uniqueness of the moment. Space itself has form. It has as much shape and dimension as the sculpture it surrounds. And, like the sculpture, the space changes shape from each new viewing angle. This void creates an invisible series of forms – a progression of connected experiences that supports and illuminates the visible form. Your attention moves from one space to another in a continuous dance of interest, visual stimulation, a sequence of discoveries.

Shifting your focus to give space the same amount of consideration as the form is a challenge. I recently gave a student the following exercise to help open his eyes. First I had him create an abstract form in clay and place it inside a container. Then I had him fill the container with plaster. When that was cured, I told him to remove the clay and observe the plaster form that remained. Form and space were reversed. The plaster turned invisible space into a tangible form. Once seen, space cannot be unseen. For a sculptor, seeing space as a solid form is a revelation worth pursuing.

Some years ago, I read a short blurb about a new 3D technology that could paint an image directly onto the retina. The resolution was poor but there were high hopes that would be improved. I never heard another thing about it, but it got me thinking. Would there come a day when you wouldn’t be able to tell the difference between physical reality and a computer-generated environment? Descartes made the case that if you could, without a doubt, think you existed- that in itself proved your existence. Descartes didn’t have an iPad.

In a general sense, one can say a computer system can define points in space. How many of those points can be defined (resolution) and how quickly those points can be redefined is determined by the speed of the machines and the skill set of the programmer. Those factors have come to the point where that bit about not being able to tell the real world from a computer-generated world is rapidly coming true. The Goodwill has lots of 3D Goggles. They cost $5 or so. Download the rollercoaster app. (it’s free), slip your phone in there and there you go. What’s this mean for sculpture? All kinds of fun things.

In a virtual world, one can define their own laws of nature. One can redefine material properties. Weightless, magnetic marble? Winged kittens? How about a room full of creepy statues that respond to your emotional state. I am pondering all this and imagining entire constructed worlds when, sculptor, Andy Kennedy sends me a video. I find myself in a real gallery, with sculptures that can only be seen when viewed through a phone, tablet, or 3D goggles. This is augmented reality, the real world with 3D technology digital constructions superimposed upon it. Here was a way to focus on virtual sculpture without the distraction of having to construct the environment as well and the consequent problem of how one would move about in it realistically. Using the real world as the stage resolves that nicely. I’ve posted some links below.

Here is a link to an artist. His name is Maxim Zhesthov. This is an example of redefining material properties. I thought this was real until something happened that could only be digital. Remember all those people wandering the streets staring at their iPhones playing Pokemon, peeking under bushes with their phones looking for little creatures? That is an example of augmented reality.

In the above image, only the little man is digital. The full video can be seen if you follow the link. The artists are Adrian M and Clair.

The argument can be made that such things are not sculpture because they don’t have a physical presence, but isn’t that what a painting is, an image of a real thing? And does it matter anyway? The point here is that this is a new brush, a new tool.

To learn more about George’s work, Pacific Northwest Sculptors, and contact us today!