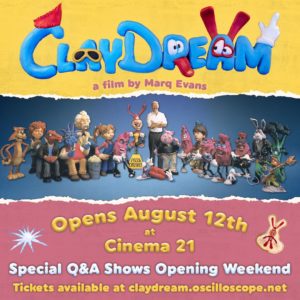 The film CLAYDREAM is a new documentary about Will Vinton and his team of creatives. The Oscar-winning animation pioneer known as the ‘Father of Claymation’ created such iconic characters as the California Raisins, Domino’s Noid, the hit show The PJs, and many more.

He was the king of animation, a would-be Walt Disney, until his kingdom of clay came crashing down spectacularly.

The film will open at Cinema 21 in Portland on 8/12 before a nationwide roll-out.