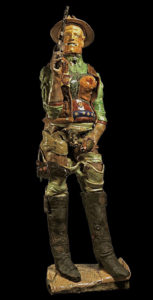 In a remarkable way, Ben Sams had something to do with our recent exhibition at the ArtReach gallery. One of his ceramic sculpture pieces, “Texas Ranger” stood in a side room at the Making Space exhibition. Bob Dale is seeking attention for the work of Ben Sams that happened in the ArtReach gallery. One thing led to another resulting in our group show with the NW Stone Sculptors Assn.

The art world presents a complicated and sometimes confusing environment where significant recognition and fame can be as random and elusive as winning a lottery.

While there are thousands of recognized painters and sculptors internationally, one medium where the number of true geniuses is minimal is that of ceramic sculpture. That may be a result of ceramics perhaps being considered more as a craft than a true art medium. The word ‘ceramics’ almost immediately brings up mental images of pots and tiles rather than credible works of art. However, the medium of clay provides a truly creative artist with an almost unlimited opportunity to express ideas and images.

One of the most creative, yet unfortunately nearly forgotten, pioneers in this field was Ben Sams. He came upon the scene in the 1960s and almost immediately created a name for himself as an innovative genius. The ‘60s and ‘70s were a period of political turmoil and questioning of values among the younger generation. Sams could pull together diverse thoughts and ideas into often whimsical ceramic sculptures that could make people laugh. They compelled one to think about some of the statements he was making on the social issues of the day.

Quoting his own description of his work, Sams wrote: “The early sculptural images I made did not reveal if I was pushing reality towards abstraction or abstraction towards reality, and the resolution of my problems always remained visually exciting.”

Sams’ heritage had a significant influence on his approach to art. He was born in Texas in 1945, where his father, a Native American from the Walla Walla Tribe, was stationed during WW II. The family then moved to Montana, closer to the roots of his paternal ancestors. Sams began his studies in art at the University of Montana in 1965 under two well-known ceramicists, Rudy Autio and Peter Voulkos. There he learned various techniques and processes which he adapted to his work in ceramic sculpture.

One such process used in printmaking is called collagraphy. It employs pieces and textures from various sources built up onto plates that can then be used to print. While typically used to produce prints on paper or canvas, Sams decided to use the technique to create textures and images in clay. These could then be incorporated into larger pieces to provide backgrounds or segments of the larger story being told in a particular work.

The Evolution of Recognition in Sams’ Work

1967 was the year Sams married his first wife, Dana Boussard. That year, his innovative work began to gain national recognition with numerous exhibitions, including one at the Legion of Honor Museum in San Francisco. That exhibition was sold out. These resulted in commissions from collectors who began to recognize and appreciate his unique talents and styles. Sams continued to create and display exciting ceramic sculpture works from 1967 until 1972 when his life changed somewhat dramatically with a divorce and a move from Montana to the Seattle area. There he tried to balance his creative work and exhibitions with teaching at Highline Community College and later Evergreen State College in Olympia.

He married Cynthia Tasso in 1975 and moved his studio into a large barn on her property northeast of Seattle. There he began to experiment with the chemistry and physics of glazes he could produce to enhance and dramatize elements of his works. In his own words:

“Glazes and glass represent a very separate discipline that must be united to the finalized clay form by means of extreme heat. The development of a glaze or glaze colors involves continuous experimentation into applied chemistry.”

Sams continued to produce unique and notable works for the next three years until shortly after a well-received exhibit in Bellevue, Washington in 1978. He then decided that he needed to take a break from juggling the creation of art and the commercial activities associated with promoting it. By doing so, he left many unfinished works in his studio and moved on to dealing with real estate and studying common law.

Sams returned to his art in 2001 with a new passion. Unfortunately, the following year he died unexpectedly while on a beach walk with his wife and dog on the Washington coast.

While Sams’ long hiatus resulted in his name losing the momentum, reputation, and recognition as a significant pioneer in the world of ceramic arts, his legacy still lives on in his many surviving works valued by collectors, internationally.

Author Zig Lambo is a consultant on sculpture and resource-based investments.

This article was reprinted from the Art and Museum magazine spring 2019 issue. Art and Museum Magazine is a publication of Domos Fine Art Advisors of the UK.