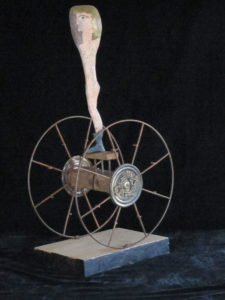 A hundred and one million dollars is a lot of money but that’s what hedge fund manager Steven A. Cohen paid in 2015 for Alberto Giacometti’s sculpture, The Chariot. Giacometti was a multifaceted artist who achieved his greatest recognition for his freakishly elongated spider-like human figures. A prominent existentialist philosopher explained Giacometti’s figures as depicting the estrangement of modern (post WWII) individuals living in an empty cosmos devoid of meaning.

To me, one thousand and ten dollars is a lot of money and I was thus inspired to carve and assemble my own Spoon Charioteer. The one hundred and one million dollar version of Giacometti’s bronze masterpiece is number two of an edition of six, cast in 1951-52, and is only three inches less than six feet tall. In comparison, my humble version stands only three inches more than two feet high (25Hx8x12 inches) and is made of scraps of wood and metal. The most cunning features of my chariot are the wheels made from Progresso soup can lids, drawer pull escutcheons, and a rusted electrical cord spool. Everyone should have a shop with such serendipitous junk. My Spoon Charioteer is really one half unpainted black walnut spoon and one half painted and low relief carved charioteer.

A spoon may seem to be a perplexingly mundane motif for serious sculpture but I have been first, whittling, and now carving spoons since 1972, so even if you send the sheriff to try to make me stop, I won’t. Although otherwise not remotely comparable, my spoons are to me what Michelangelo’s ignudi (naked men-women) were to the greatest sculptor who ever lived. Spoons combine the male handle with the female cup, the sinuous, unpredictable curves of the voluptuous mature woman with the predictable stiffness of the militaristic male and the convex with the concave; and spoons are neither left or right, or up or down, and they spoon (nest) in perfect unity.

The charioteer side of my sculpture is an androgynous, golden haired adolescent who looks to me like one of the Archaic kourus that preceded the golden age of Classical Greek sculpture. He is gloriously beautiful, naïve, and lusty. He is representative the new generation, both female and male, the one that always, and without fail that rolls in to replace the cynical, the plumb tuckered out, and the put into barn wet and tired.

Spoon Charioteer is not a mere copy like Steve Cohen’s, mine is original, unique, and still for sale.