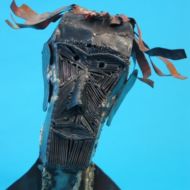 I sculpt in fabricated and forged metals. Often my work, especially my bell compositions, is accented by wooden elements lending warmth and an organic feel to the completed piece.

I sculpt in fabricated or forged metals primarily using welded steel and copper.  In the last five years, I have increasingly integrated wood elements into my compositions to lend warmth and an organic element to the work.  I am quite attracted to functional art ranging from lighting to furniture and architectural fixtures.   I am currently working on the Fifty Bells Project, an initiative to create a limited edition set of the finest craft bells in America.

GALLERIES/ RETAIL (CURRENT AND PAST)