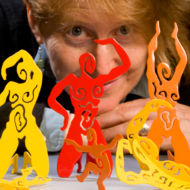 It is my goal to create sculpture and images that bring joy, connection and meaning to people who experience them. I shape and fabricate metal into open, energetic form, portraying movement and the expression of life.

Best known for her award winning outdoor sculptures, Alisa Looney has exhibited in the U.S. and Canada. Her work is in a multitude of private and public collections, including Maryhill Museum of Art in Goldendale, WA, and several U.S. cities in the Northwestern states of Oregon, Idaho and Washington.

She expresses her ideas through sculpture, dance, painting and enameling in her Bend, OR, Studio.  At the age of four, Alisa began drawing and building with clay and sand on the banks of the Spokane River, in Northern Idaho. The movement of the river is still present in her work today.

She fell in love with metal arts as a silver smith in her early years, received her BFA in Design from Boise State University in 1983 and began welding in 1998.  Alisa returned to Idaho in 2010 to study with enamelist and BSU Professor Emeritus, John Killmaster, which has allowed her to merge sculpture design and narrative enamels into what she considers her most precious work to date. With John’s blessing, Alisa teaches these enameling techniques at riverARTadventures studio in Bend, and is currently developing online classes for enamellists near and far.